The Saskatchewan Industrial and Mining Suppliers Association (SIMSA) hosted global leadership persons from Boeing and Cummins for site tours, presentations, networking, plus meetings with key business leaders and alike on February 18 and 19.  The event was a result of SIMSA’s ongoing relationship with Nutrien, which led to a new relationship with the Canadian Aboriginal and Minority Suppliers Council (CAMSC).

Founded in 2004, CAMSC is a not for profit organization, who certifies indigenous and minority owned companies and  connects these diverse suppliers into the supplier chain of large companies across corporate Canada.

As a result, Boeing and Cummins discovered a skilled and integrated hub of industrial suppliers for consideration; SIMSA members were able to begin the diversification of their client base; and persons in Saskatchewan learned of the importance of diversity within the supply chain from global leaders.

The visiting guests were:

This event was the result of a long developing story, as Nutrien introduced SIMSA to CAMSC’s President – Cassandra Dorrington – 2-years ago.

Historically, SIMSA and Nutrien have worked together on several projects including; a series of Aboriginal awareness workshops, the creation of SIMSA’s Aboriginal inclusion guidelines, roundtables with the Saskatoon Tribal Council and the File Hills Qu’Appelle Tribal Council, several community events, and other items.  It should be noted that at the round table events, Nutrien provides information from, and conversations with, up to 40 of their procurement and executive team – they provide unprecedented access.

After a short conversation with Dorrington of CAMSC, it quickly became clear that a relationship between CAMSC and SIMSA, would benefit SIMSA members.

Then, via a series of calls, the group settled upon the concept of four events: one was in December 2019 with SIMSA’s existing Aboriginally owned company members, the second was site tours by Boeing and Cummins; the third was  a business networking dinner  with political and business leaders that occurred on February 18, and the fourth being a business education  and networking event on the 19th.

Boeing and Cummins toured 6 SIMSA member facilities, after reviewing member submissions and making their own selections.  They witnessed the breadth of the local supply chain and were impressed by SIMSA members’ willingness to work together and care for their employees.

Later the same day, a business networking dinner was held so that Saskatchewan business leaders and politicians could welcome the guests.  Additionally, they heard a short presentation from Boeing’s Camille Geiger, on their diversity and inclusion experiences, in particular as it relates to supplier diversity.  It should be noted that these USA based companies have been working in this sphere for decades and to do business with their federal government, it is a regulation. (Note:  Supplier diversity is a proactive initiative on behalf of businesses to build a more inclusive supply chain by reaching out to include those groups currently underrepresented at the table. This would include businesses who are 51% owned, managed and controlled by indigenous, minorities, women, veteran, person with disabilities, and the LGBT.)

Attending the supper was the Honorable Don Morgan who extended a welcome from the Province of Saskatchewan.  Mr. Morgan is the Minister of Justice and Attorney General, Minister of Labour Relations and Workplace Safety, Minister responsible for Saskatchewan Workers’ Compensation, the Global Transportation Hub Authority, and SaskTel.

Lisa Mooney – Nutrien’s Global Lead for Strategic Inclusion – delivered some contextual remarks on Nutrien’s Aboriginal Inclusion journey.  She also explained that Nutrien who recognized the value of diversity in the supply chain, introduced SIMSA to CAMSC.  CAMSC in consultation with Nutrien and SIMSA invited Boeing and Cummins to Saskatchewan given their positions as industry leaders in the area of supplier diversity.  The overall goal of this event was to help diversify and strengthen the local supply chain, with a focus on indigenous suppliers, by opening them to markets outside of the commodities sector and also into regions beyond the Canadian borders. Of note, Nutrien’s Lisa Mooney sits on CAMSC’s Board. 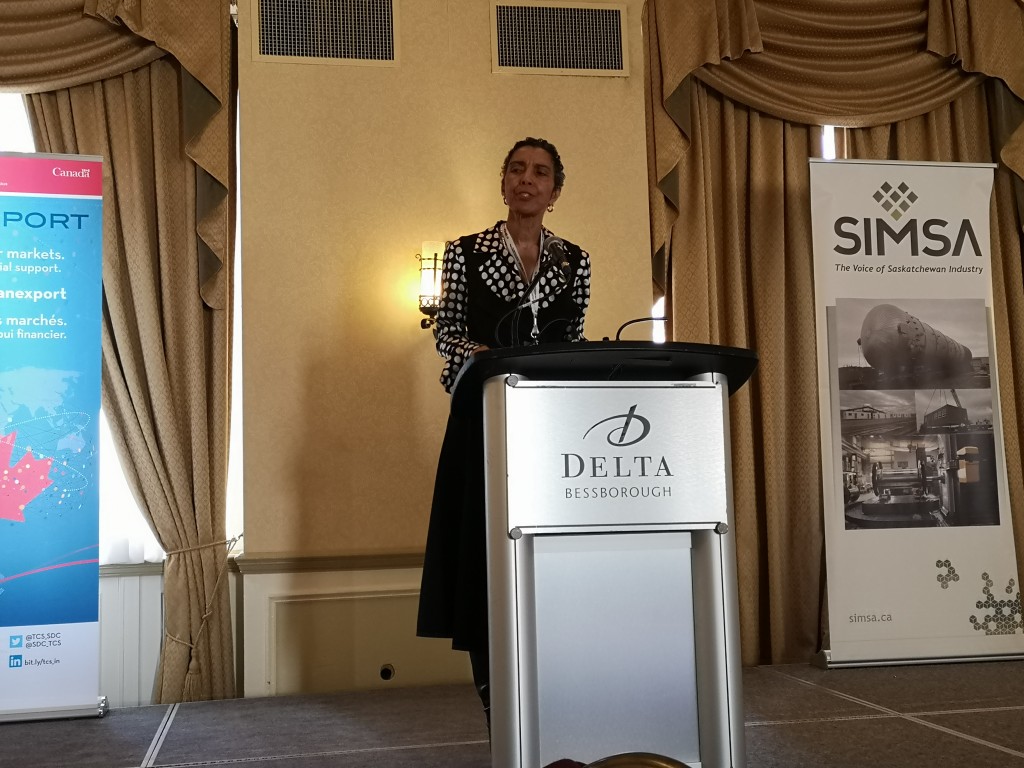 The final session was on February 19 – a full-day of presentations and networking.  The event began with a message from Nutrien and was followed by CAMSC’s President – Cassandra Dorrington.

Dorrington and her team, lead the charge of championing business relationships and economic growth of the Canadian supply chain, through the inclusion of Aboriginal and Minority suppliers. During her tenure, Cassandra has been focused on the expansion of the CAMSC brand both nationally and internationally, resulting in significant growth and impact in the Canadian marketplace.  With approximately 450  certified suppliers, 85 corporate members and more than $5 Billion in diverse spend.

CAMSC is a certification body working between major corporations and the Aboriginal and minority supply chain.  CAMSC certifies suppliers who are 51% or more owned, managed or controlled, and then works to connect them into the supply chains of government, corporate Canada, US and beyond.  CAMSC’s corporate members include Nutrien, Boeing, Cummins, RBC, EY, GM, Ford, FCA, etc.

In addition, at the event, in an effort to overcome business issues related to developing partnerships and/or joint ventures between Aboriginal and nonaboriginal businesses, RBC’s David Reid – Manager Indigenous Banking Saskatchewan – presented on “How to Build Partnerships.”

Similarly, Kim Brown from Global Affairs Canada – Trade Commissioner, Prairies and NWT Region – presented on the support and funding mechanism available from the Government of Canada, for SME’s looking to grow into other markets.  Also, both Brown and Reid spent time networking with all in attendance, throughout the day. 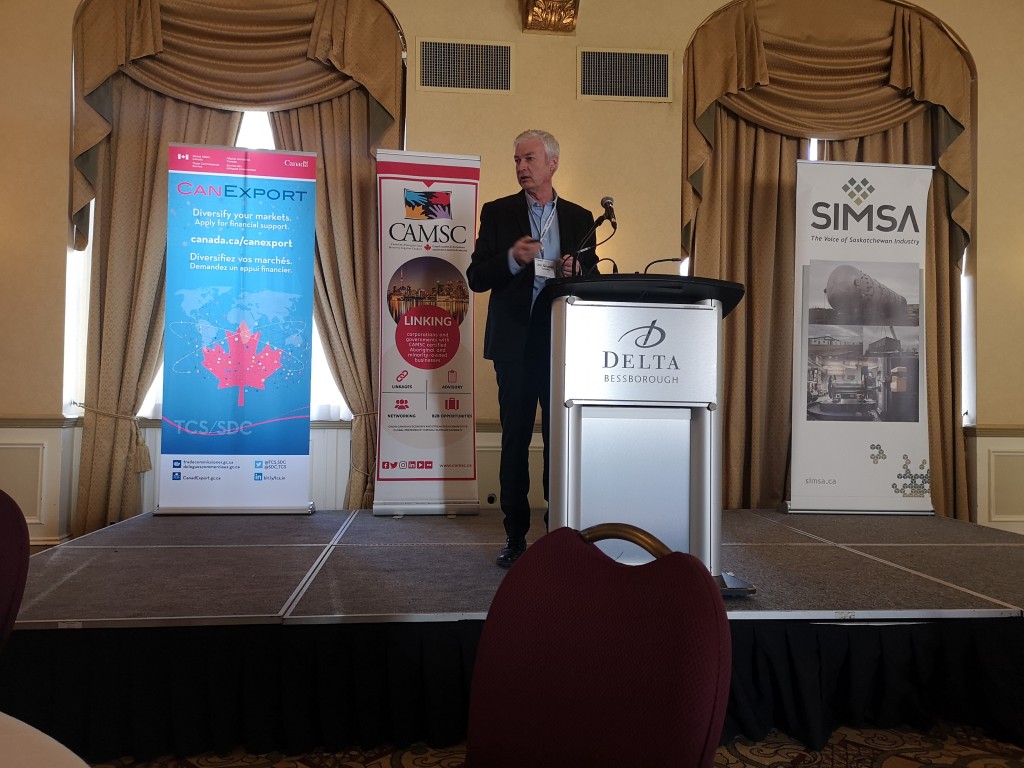 Jim Gruwell of Cummins, presented on the history of Cummins, their structure, and how to do business with them.  A great deal of time was spent on the importance of the alignment of business values in building reputable and caring business relationship.

Toni Hall of Boeing, presented on the history of Boeing, their structure, their diverse operations, and how to do business with them.  Boeing is looking for disruptive technologies and a broad and diverse supply base to support their global activities.  Their visit to Saskatchewan was partially an effort to find new products or services, that could be applied in a different way, to support the activities as diverse as interplanetary travel.  They commented that they sometimes travel to regions and meet hundreds of suppliers, and do not find any they could work with – but the trip to Saskatchewan revealed the potential for several. 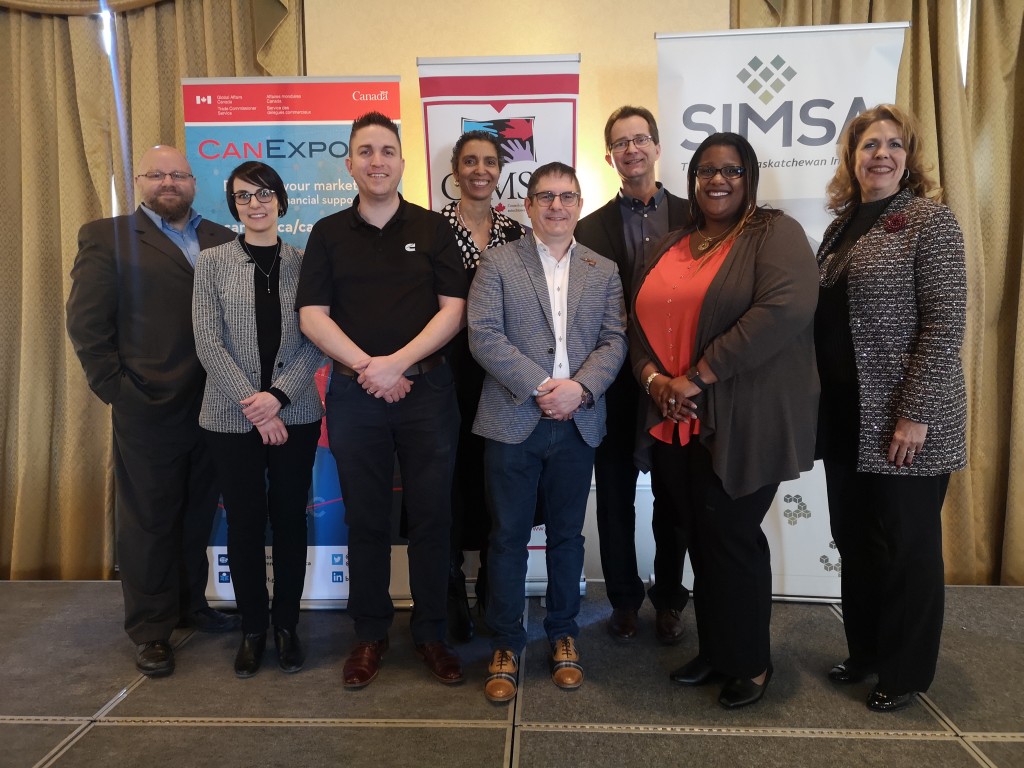 SIMSA’s Executive Director Eric Anderson repeatedly commented during his hosting of the events, “SIMSA is grateful to Nutrien for making all of this possible.  Without their introduction to CAMSC, which then led to Boeing and Cummins, nothing would have happened.  This is a pure example of a great company supporting the province.”  He coupled this message with, “And then we need to thank CAMSC for introducing us to Boeing and Cummins.”

SIMSA, Nutrien, and CAMSC are currently in discussions towards hosting further events, in an effort to build and strengthen a diversified supply chain.  (Note: Cassandra Dorrington can be reached at [email protected]/ www.camsc.ca.)

About the Saskatchewan Industrial and Mining Suppliers Association (SIMSA):

SIMSA is the Saskatchewan Industrial and Mining Suppliers Association, representing Saskatchewan based companies who provide goods and services to mining, oil and gas and industrial projects.  SIMSA’s membership of over 200 companies, represents over $10-billion in annual revenues and 21,000 employees in the province.  SIMSA’s mandate is to represent the interests and concerns of Saskatchewan industrial equipment and service suppliers, through promotion of its members and the creation of partnerships with industry and other associations.