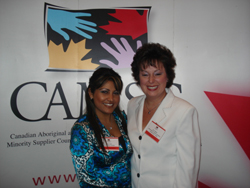 It was in Chicago, in 1968, that the National Minority Supplier Development Council grew out of an effort to showcase minority businesses to the Windy City. Today, major U.S. firms, including Fortune 500 companies, have adopted what is now referred to as ‘supplier diversity’ into their operations-good news for qualifying Canadian firms owned by Aboriginal and visible minorities with the U.S. in their expansion strategy.

But in order for Canadian companies to participate, they need to be certified for eligibility by the Canadian Aboriginal and Minority Supplier Council (CAMSC), the sister organization to the National Minority Business Supplier Development Council in the U.S.

CAMSC has standardized procedures to assure the consistent and identical review and certification of Aboriginal and visible minority owned businesses. (See sidebar for certification criteria)

Canadian food vendors, for example, participating in such programs in the U.S., often enjoy facilitated entry to participating supermarkets, assistance in securing a distributor, and a reduction or elimination of slotting fees, which are charged by supermarkets in order to have product placed on their shelves.

Anita Saini, owner of Ontario-based Devya Indian Gourmet, is one entrepreneur who has earned preferred supplier status with major American retailers. And it all started with the Canadian Trade Commissioner Service.

To be certified by the Canadian Aboriginal and Minority Supplier Council, an applicant must:

Saini was just beginning to contemplate a U.S. expansion when she met Philadelphia-based Trade Commissioner Beth Pomper at the Food and Beverage Show in Toronto in 2006.

Pomper explained that Saini could gain certification through CAMSC and then invited her to an event at which she met Supplier Diversity Directors from retail chains. Saini stayed on their radar and, within a few months, sealed her first deal.

She says that once established there, she moved on to the next chain, and then the next one. “Beth calls me her diversity champion,” says Saini.

“You have to remember that Supplier Diversity Directors are gatekeepers,” she says. “It is better than going directly to the buyer who doesn’t know you. Instead of standing in line, I work with the diversity representative who essentially walks over to the grocery buyer’s desk to show my product. He advocates on my behalf. His role is to bring diversity sellers to light.”

Saini says she has found Supplier Diversity Directors to be very supportive. “They explain how to navigate, how best to do business with their chains.” She makes a point of nurturing these relationships. “Last year, I attended the diversity supplier national conference. As a result of spending time with diversity coordinators, I got into Kroger and Safeway, so I’m now selling in quite a few major national U.S. chains.”

Pomper considers the key benefit of supplier diversity programs to be financial. “Canadian companies have to pay an entrance fee to get into U.S. stores. For dry goods, it ranges around $25,000 an item, for chilled or frozen goods, up to $35,000 per product. If you’re selling strawberry, vanilla and chocolate, triple those numbers. And the fees have to be paid before the product is made available for sale. Small companies can’t afford this – but as diverse companies, the entrance fees are waived.”

Over the past two years, Pomper has worked with some 75 Canadian companies in her area of expertise (food and beverage) and hopes that awareness of the program spreads through promotional efforts such as a women’s mission from Atlantic Canada to Philadelphia and New York in June.

“This is a great program for small business. These are people who might only be able to sell locally were it not for this program,” says Pomper.

The diversity supplier program is not limited to retail. As Pomper puts it, it includes “anything a company would write a cheque for.”