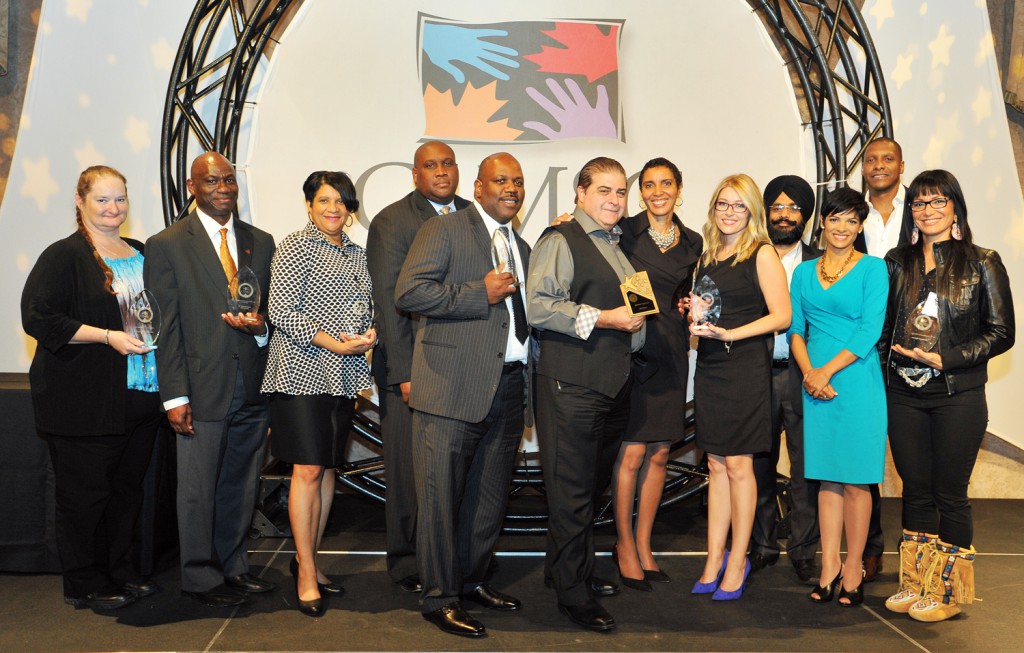 Since CAMSC’s inception in 2004, leading corporations in Canada have spent more than 1.2 billion dollars with Aboriginal and minority owned suppliers. “This demonstrates a clear commitment to an inclusive and diverse supply chain that is creating jobs in Aboriginal and minority communities.” said Cassandra Dorrington, President of CAMSC.

Photo Cutline: (from the left)

Supplier of the Year – New Malwa Express Awarded to an Aboriginal or Minority-owned business, the supplier of the year award goes to a company with impact – in sales and export growth or as an industry innovator. Founded in 1997 by Gursewak and Narinder Singh, New Malwa Express began with just three trucks working as owner-operators for other transportation providers. With recent purchases, New Malwa now owns a fleet of 95+ trucks and 250 various types of trailers providing services to General Motors and Linamar along with numerous others. To facilitate the services in Canada, the US and Mexico, New Malwa currently operates three terminals located in Mississauga, ON; Romulus, MI & Laredo, TX. They are in the process of opening a fourth terminal in Louisville, KY. The recent purchase of 10 acres of land in the Detroit area will increase capacity for New Malwa and will allow them to operate a repair facility on site that will enable them to get trucks back on the road quicker thus offering enhanced service for their customers.  New Malwa has been experiencing steady growth over the last few years and a record revenue growth of more than 50% between 2012 and 2013. New Malwa Express is a certified supplier that recognizes the benefit of supplier diversity with a workforce that is comprised of 80% minority employees. New Malwa also actively promotes and utilizes diversity in their supply chain and within the last year have recorded spend with CAMSC certified suppliers of 40%.

CATA Technology Innovation Award –Canadian Prairie Garden Purees Awarded to an Aboriginal or Minority-owned business for the most innovative new technology-based product or service Canadian Prairie Garden Purees (CPG), founded by Sandy Bay First Nation member Kelly Beaulieu is a Manitoba-based agri-business whose mission is to provide top quality vegetable, berry and legume puree products to the food industry in Canada and around the world. When you think of the word ‘innovative’, fruits and vegetables are probably not the first things that come to mind! But that’s going to change with the introduction of Innovative Steam Infusion Cooking Technology from Canadian Prairie Garden.The technology has been redesigned for use as a puree processing system by CPG and this commercial process line is the only one of its kind in the world and the intellectual property to operate the equipment and to create premium purees is owned by CPG. This patented ultra-high temperature direct steam injection process “flash cooks” legumes, fruits and vegetables in 4-20 seconds and then it is moved through a rapid cool down chiller system that reduces the heat from 138 degrees celsius to a packaging temperature of 25 degrees. Canadian Prairie Garden Purees offers a truly green process with 30% reduction in energy consumption, water usage and waste and up to 60% reduction in cleaning chemicals. As top quality cull produce will be utilized by CPG, local farmers will have the ability to sell approximately 30-60% more of their current production. It has generated great buzz and interest in the industry from Nestles, Sodexo Canada, Tim Hortons, Lassonde, Kitchen Partners and Campbell’s Soup.

Procurement Business Advocate of the Year –Edet Umoafia, ABC Group Presented to an individual who strongly promotes supplier diversity through outreach efforts/activities and is respected by their peers for advocating supplier diversity in Canada. Edet Umoafia and ABC Group are strong supporters and advocates of CAMSC. As the Lead Coordinator for ABC Group’s Supplier Diversity Program, he reached out to over sixty small businesses and referred them to the CAMSC diversity supplier program. Sharing about the benefits of CAMSC and how business owners can become certified suppliers to ABC Group, this has led to an increase in ABC Group’s diverse supply base and improved program spend with their suppliers. Thirty of these companies are now CAMSC certified suppliers, supplying goods and services to ABC Group. Edet has been a regular speaker at CAMSC events sharing ABC Group’s learnings and successes. Because of his commitment to and active promotion of supplier diversity, certified Aboriginal and Minority Suppliers are now competing and introducing their businesses to other organizations similar to ABC Group. They are showing strength and gaining opportunities. While ABC Group is celebrating its 40th anniversary this year, Edet Umoafia and ABC Group are also proud of their advocacy efforts towards supplier diversity and the commitment of bringing more Aboriginal and minority owned businesses into CAMSC.

Tier 1 Champion of Supplier Diversity – Flex-N-Gate Presented to a business-to-business Tier 1 corporation that actively supports its clients’ economic inclusion goals by including certified Aboriginal and minority suppliers in their procurement opportunities, assisting in the development of Aboriginal and minority suppliers, and actively promoting supplier diversity across their corporation. Since joining CAMSC in 2006, Flex-N-Gate has demonstrated an outstanding commitment to inclusion of CAMSC suppliers in opportunities to support its extensive range of automotive components and assemblies. Their investments in inclusion range from demonstrated leadership support and consistent supplier diversity reporting at Global Purchasing meetings, to direct supplier development as buyers provide valuable feedback to assist with future quote opportunities. The supplier diversity team works closely with each purchasing director and commodity teams to review internal and customer goals, as well as current and future project opportunities. In addition to streamlining internal reports so buyers can quickly identify relevant certified suppliers, a recent practical innovation was development of a “Needs Board. The Needs Board showcases any immediate opportunities within the company at supplier outreach events. The supplier diversity team works with buyers at over 50 locations to make a list of suppliers or services that are currently or will soon be quoted, which has resulted in same-day matches and quotes. These investments have delivered impressive results. Flex-N-Gate’s multimillion dollar spend with CAMSC certified suppliers increased 120% from 2012 to 2013, and is continuing a similar trajectory into 2014. Also notable is the jump from 15 to more than 30 CAMSC certified suppliers doing business with Flex-N-Gate across a greater number of facilities. Flex-N-Gate is truly a Champion of supplier diversity, demonstrating the significant role that Tier 1 suppliers make in expanding business opportunities for Aboriginal and minority-owned suppliers.

Collaboration Award – Accenture Presented to a company/organization which works collaboratively with CAMSC members, suppliers or other organizations to strengthen Aboriginal and minority business growth and facilitate supplier diversity. Accenture has demonstrated a collaborative approach to supplier development since it launched its supplier diversity program in Canada. In addition to engaging a range of CAMSC certified suppliers in IT and Professional staffing, Accenture recognized early on that it could make a significant contribution to a broader group of suppliers with the launch of its Diversity Supplier Development Program. Their formal mentoring program leverages its extensive in-house knowledge by matching diverse suppliers with Accenture senior executives as one-on-one mentors to help develop and build the capacity of their businesses.  Their mentorship program, the first of its kind open to all CAMSC certified suppliers, inspired other Canadian corporations to invest in supplier development. Accenture willingly shared its mentorship learnings and best practices as well as program benchmarking with other CAMSC members, actively guiding other organizations as they developed in-house mentorship programs. This led to collaborative mentorship workshops with RBC, TELUS and others, which has delivered even greater opportunities for the participating suppliers. Their collaborative approach extends beyond sharing best practices. Accenture also partnered with investors and other organizations to develop Indigena Solutions, a First-Nations owned IT and business process services provider in BC, to build IT capacity amongst First Nations in BC and beyond. Accenture demonstrates that collaborative efforts are invaluable in scaling the impact of supplier development and Aboriginal and minority economic inclusion.

Small Business of the Year – Manitobah Mukluks Awarded to an Aboriginal or Minority-owned business with 50 or fewer employees, based on business growth and development, export sales growth, and major accomplishments during the previous year. Manitobah Mukluks, is an Aboriginal–owned company, whose vision is to build a vibrant global brand that makes a significant impact in Aboriginal communities. Founded in 1997 by Sean McCormick, this Winnipeg-based footwear company has taken traditional mukluks and moccasins and adapted them for modern wear. Along with natural hides and fur, Manitobah worked with Vibram to create high performance mukluk soles that make their boots as functional as they are beautiful. Now sold at top fashion retail across Canada and the world, Manitobah Mukluks made the PROFIT 500 list of fastest growing companies in Canada and number 1 in footwear manufacturing.  The company’s growth has been remarkable with 3,000 pairs sold in the first year and 100,000 in this last year. Revenue growth in the last three years has increased yearly by 50%. Retail partners include Holt Renfrew, Nordstrom, Brown Shoes, Cabelas and Town Shoes among others.  Manitobah Mukluks is committed to sharing their success with the community. Along with Aboriginal hiring practices and capacity building programs, Manitobah launched the Storyboot Project in 2011. This initiative aims to revive the traditional arts by creating partnerships with elders and artisans who fashion mukluks and moccasins the traditional way. For every Storyboot sold, the artist receives 100% of the profits. The success of the Storyboot Project has also lead to a Storyboot School where artists pass on the timeless skill of crafting Aboriginal footwear by hand.

Corporation of the Year – General Motors Presented to the corporation that actively includes certified Aboriginal and minority suppliers in their procurement opportunities, assists in the development of Aboriginal and minority suppliers, promotes supplier diversity and business development within their corporation and to their vendors and other businesses organizations. As a pioneer of supplier diversity, GM is committed to building a global culture of diversity and inclusion which provides a strategic advantage for designing, building, and selling the world’s best vehicles. Their commitment to diverse supplier inclusion is apparent from their direct spend of more than $210 million dollars with CAMSC certified suppliers in 2013, a 95% increase from the previous year. But their commitment extends far beyond dollars spent. GM has invited qualified CAMSC suppliers to participate in its comprehensive supplier mentorship program, and has teamed up with CAMSC to host a targeted supplier feedback forum and networking sessions. Their annual Supplier Connections event enables certified suppliers to connect with more than 100 automotive Tier 1 suppliers to GM, dramatically increasing their opportunities for networking and business connections. They advocate the business value of supplier diversity at outreach events across Canada with CAMSC and other organizations, helping to build understanding and momentum for an inclusive supply chain. GM also hosts various supplier development sessions, including hosting MMSDC’s Immersion Day, with the goal of strengthening strategic thinking by diverse suppliers and enhancing their growth potential. Clearly, their supplier diversity leadership is helping them meet their commitment to deliver“Vehicles as diverse as the people who build them”.

About CAMSC:
CAMSC is a non-profit organization dedicated to the economic empowerment of Aboriginal and visible minority communities through business development and employment. CAMSC’s mandate is to identify and certify Aboriginal and minority-owned businesses, and facilitate their access into the supply chain of major corporations in Canada.

Founded by corporate Canada in 2004, CAMSC acts to facilitate access for Aboriginal and minority-owned suppliers who may not previously have been able to penetrate traditional corporate supply chains. In return, corporations are gaining choice, innovation, competitiveness and social license by accessing an underutilized yet growing supplier base in their communities. CAMSC is associated with the National Minority Supplier Development Council in the U.S.For more information, please visit www.camsc.ca.