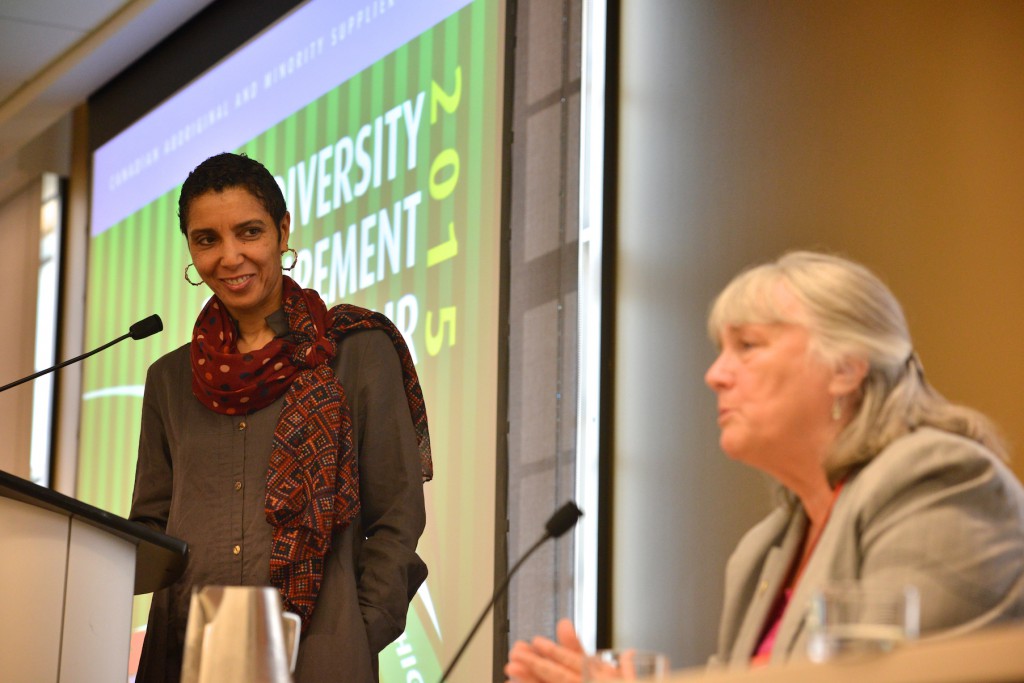 Toronto, April 15, 2015 – The Canadian Aboriginal and Minority Supplier Council (CAMSC) welcomed Barbara Anderson, CFO, Toronto 2015 Pan/Parapan Am Games today as keynote speaker at its 11th annual Diversity Procurement Fair at Allstream Centre. Since 2004, the fair has been matching some of North America’s largest corporations with Aboriginal and minority-owned suppliers. To date, corporate members have spent over $1.2 billion with CAMSC certified suppliers. The event started with morning workshops and concluded with pre-arranged meetings between corporations and suppliers in areas ranging from IT, HR recruiting, and logistics.

“We hosted almost 300 large corporations, suppliers and government agencies today,” said Cassandra Dorrington, President, CAMSC. “This fair is about supplier diversity from both sides of the table – corporate and supplier. Half a billion dollars’ worth of business is secured annually and it starts here. It’s about making that business connection to benefit both sides. ‘Aim high’ was our theme and we kicked it off today, with expectations for continued growth moving forward.”

“We’re known as “the People’s Games, and that means striving to engage as many people and communities as possible,” stated Barbara Anderson, CFO, Toronto 2015 Pan/Parapan Am Games.  “We’re welcoming athletes, coaches and visitors from 41 countries across the Americas and our organizing committee and our region’s diversity is one of our greatest assets in hosting a truly great Games.”

A number of CAMSC certified suppliers have already been contracted by the Toronto 2015 Pan/Parapan Am Games. This includes Forward Signs, UNIKRON and Aboriginal Printing.

“I have been a CAMSC supplier member for almost a decade,” explained Steven Bolduc, Managing Director, Aboriginal Printing. “The opportunities that have been provided with events such as the Diversity Procurement Fair have been tremendous. I will be providing printing services for the upcoming games and CAMSC helped to make that a possibility.”

“Minority-owned businesses rely on organizations such as CAMSC to open doors for us with corporations that have a supplier diversity mandate,” explained Aaron Madar, Manager, Forward Signs. “As a Chinese-run business, it’s easy to make the business connections in our own community, but CAMSC has been instrumental to help us grow in other ways.”

“CAMSC has put us in contact with large corporations on a level playing-field where we have been considered to work directly like any large agency,” stated Manual Rodriquez, CEO, UNIKRON.

About CAMSC
CAMSC (Canadian Aboriginal and Minority Supplier Council) is a non-profit organization created in 2004 to advance the economic strength of Aboriginal and visible minority communities through business development and employment. CAMSC’s mission is to facilitate business relationships with Canadian corporations dedicated to diversity and supplier organizations owned by Aboriginals and minorities. Since its inception in 2004, corporate members have spent more than $1.2 Billion with CAMSC certified Aboriginal and minority-owned businesses. Visit www.camsc.ca.