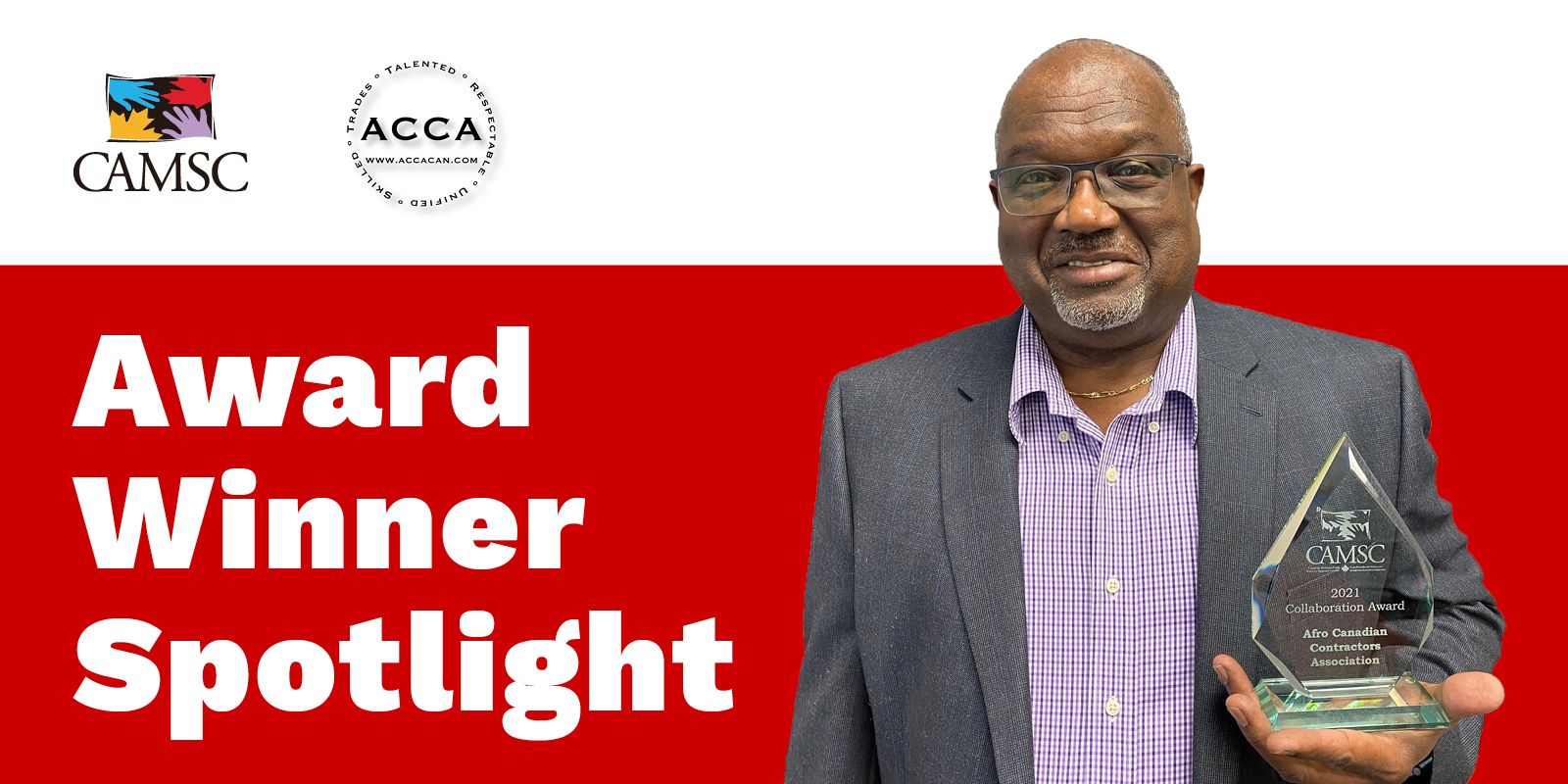 Last month, the Afro Canadian Contractors Association (ACCA) won the Collaboration Award at CAMSC’s 17thannual Business Achievement Awards Gala, which President Stephen Callender says came as quite a surprise. “After only being in existence for one year, this is a good sign that we are on the right path,” he says.

Stephen, Sephton Spence, Omari Frances, Kimoy Francique, George Lloyd and Brian Smith founded ACCA in 2020 as a direct response to the lack of black contractors within Canada’s construction industry. The response, says Stephen, was met with overwhelming support and success.

After their COVID pandemic stalled ACCA’s initial plans, Stephen and his team gathered at a local restaurant to discuss how to launch the organization in August 2020.In February 2021, during Black History Month, the Afro Canadian Contractors Association was announced to the public. Stephen says the response from the public, businesses, and media was, for the most part, positive. Many were surprised an organization representing people of colour in construction didn’t exist yet.

ACCA’s founders created this association to help increase the number of Black contractors present in Canada’s construction industry. The member-based association offers education, training, and resources to actively break down barriers that black contractors face and encourage project owners to think more intentionally about the companies they hire for construction jobs. For ACCA, seeing more black Canadians working in the construction industry, resulting in a more inclusive and diverse supply chain is what success looks like.

Bass Installation, the company Stephen has owned for 13 years, does not have a photo of him on its website. “That was for a reason. It was out of fear that I wouldn’t get any work if people saw I was a black business owner.” Stephen now plans to change that after hearing stories from marginalized workers in the industry. Stephen recalls that one of his employees told him that other companies were approaching him with job opportunities. When Stephen asked why he was sticking with Bass Installation, he responded saying, “because you’re my colour.”

“The experience I have in my office is very different that the experiences of workers on the jobsite. I was aware of the problems, but now I understand the magnitude. Representation is important so that those who are interested in a construction career feel welcome in our industry.

Stephen explains that many organizations and construction companies have diversity and inclusion policies in writing, “But it’s important to act. To not just say it, but to do it.”

Stephen has been in the construction industry for 45 years. He says he’s seen changes in the supply chain, noting that “It’s a lot better than it was, and it seems to be on a trajectory to get even better.” Since ACCA has brought this issue into the public eye, Stephen has seen more companies ask what they can do to be more inclusive, and these companies have even shared suggestions on how to improve diversity within the construction industry, indicating to Stephen their interest to collaborate. Companies all across Canada, from Nova Scotia to Vancouver Island, are asking to join ACCA.

CAMSC was ACCA’s first community partner, and Stephen encourages all ACCA members to get certified through CAMSC in order to grow their customer base with CAMSC corporate members and beyond. “It’s another way for businesses to look for diverse, skilled contractors,” he says.

To Stephen, inclusivity goes beyond race. He believes inclusive companies have people with different mindsets, ages, and religions. “You get different ideas and valuable feedback from people all coming together.” He continues by saying responsibility lies with business and project owners to make an inclusive space so that anyone who wants to apply, or bid, feels welcome.

ACCA predominately focuses on supporting Black contractors and business owners, but they welcome Canadians from all marginalized groups who own businesses in the construction industry to join. Stephen says there are still many companies reaching out to ACCA since they opened their doors to the public earlier this year.

Achieving these successes so early in ACCA’s inception is one of the many reasons why they have won CAMSC’s Collaboration Award. As Stephen leads the Afro Canadian Contractors Association into 2022, we’re confident the best is yet to come.